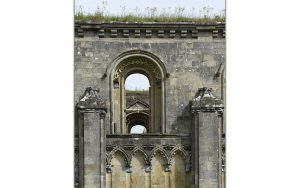 The Lady Chapel’s design was deliberately old fashioned: round-headed windows and intersecting arcading weren’t fashionable in 1184. The choice in the rebuilding of a style which had already been out of date for nearly one hundred years was a deliberate one designed to make the church look, or more importantly feel, much older than it was.

It is very unlikely that the monks were intentionally trying to fool people, more a case that they were trying to recreate a sense of what had been lost in the fire. This was a reminder that it replaced a much older church that was central to the Glastonbury story and it was important that the memory of that earlier church was somehow preserved in the building which replaced it. It replicated the footprint of the lost church and was orientated the same way at the west end of the abbey church.

Although today we see only plain stonework, medieval interiors were richly, vividly painted. Close study of the Lady Chapel has revealed traces and fragments of medieval paint in the crevices, nooks and crannies of the carvings as well as on the face of the stone itself. These show that the interior was covered with a tapestry of rich colours – ochre, red, blue, green, white and gold leaf. Almost every surface was painted and decorated with colour, patterns, figures and symbols.

Some of this scheme can be reconstructed, including plants, stars, the sun and moon. Images of the Virgin and Life of Christ would have been prominent in the painted decoration as well as the statues and the stained glass. The animated visualization at the top of this page draws on surviving evidence from Worcester, Canterbury and Chartres.