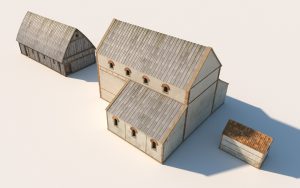 Digital reconstruction of an early phase of the church, around 700 AD

Archaeologists excavated a series of Saxon churches at Glastonbury in the 1920s. They lay to the east of the site of the legendary Old Church, and beneath the nave of the later medieval church.

The first stone church was built around AD 700. Its floor was made of reused Roman brick and tile (opus signinum). The plan was of two or three compartments – a nave (the main body of the church), presbytery (the area that lies between the choir and high altar) and chancel (east end of church) – and chambers to the north and south.

Further east there was a separate crypt or mausoleum. This was partly underground and reached by steps. An opening in its east wall allowed the relics of early saints to be viewed.

In the second phase, the church was extended eastwards. This created a chancel and square east end above the existing crypt. On each side of the nave were chambers and there is evidence for an open court to the west. This enclosed space controlled access to the Saxon church and the legendary Old Church. 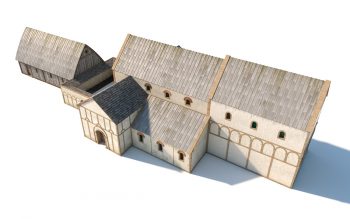 Digital reconstruction of an early phase of the church, around 900 AD 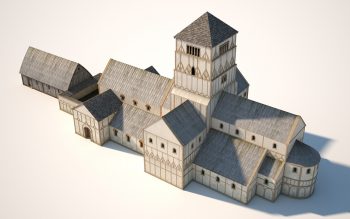 Digital reconstruction of the last phase of the Anglo-Saxon church, around 1000 AD

A third phase has been dated to the 10th century. The crypt was partly destroyed and back-filled, and a tower built over it. The church extended further east. Two-storey chambers were added to the north and south. A single large church had developed by AD 1000 from the series of separate churches that were aligned on the same axis The Old Church remained a separate and very sacred space.

Surviving and excavated examples of Saxon churches elsewhere help archaeologists to interpret Glastonbury’s evidence. The special ‘opus signinum’ floor in phase 1 is typical of Kentish churches around AD 700. The plan is similar to Kentish churches such as Reculver. Like Glastonbury, early Kentish churches reused Roman brick and tile in their construction. 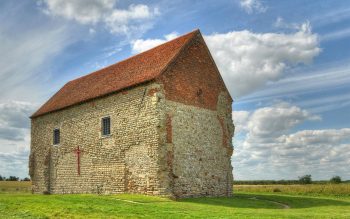 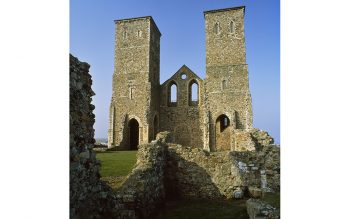 The digital modelling allowed us to test the idea that the first stone church had an apse, a semi-circular feature at its eastern end, instead of a squared end like Bradwell. The excavators believed that it had, although evidence found during excavations was not conclusive. The digital model showed that an apse would have left no room for people to access the crypt, so the end must have been square. See the animation below.

We cannot be certain of the appearance of any of the Saxon churches. Surviving churches such as Barton-upon-Humber suggest the features and external decoration that may have existed at Glastonbury.