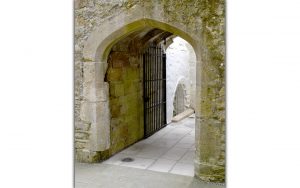 Both the Lady Chapel and the crypt chapel beneath it were popular places of pilgrimage. Medieval pilgrims prayed before the miraculous statue of the Virgin Mary and before a statue of St Joseph in the crypt for healing and other miracles. Pilgrims also visited St Joseph’s well which was accessed via a stone passage in the crypt. The well’s water was believed to have healing properties. This well was in existence long before the chapel was built, and may be Roman, but it became absorbed into the developing story of Joseph of Arimathea and Glastonbury. The very fact it was obviously old would have made it seem all the more likely that it was from Joseph’s time.

The well was so popular that a stair was later inserted near the south-east corner of the Lady Chapel so it could be accessed from both chapels. Many miracles and cures were recorded here in the early 16th century. We know people left their crutches at the altar as gifts of thanks, but they would also have left little models called ‘votives’. The holes in the chapel vaults would have held hooks from which these models or carvings hung.

The animated visualization below provides an impression of how the chapel may have looked while it was in use.

Tourism and the need to explain things to visitors in nothing new! We know medieval Glastonbury had early tourist signs explaining the abbey’s history to pilgrims because an inscription on a brass plaque was recorded in the 17th century. It explained Joseph’s association with Glastonbury to pilgrims visiting the Lady Chapel:

“The 31st year after the Passion of the Lord twelve saints, among whom Joseph of Arimathea was the first, came here. They built in this place that church, the first in this realm, which Christ in honour of his Mother, and the place for their burial, presently dedicated” 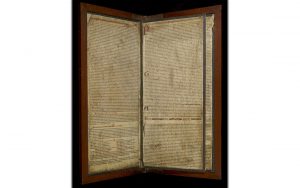 In the church, a large wooden book called a tablet (Magna Tabula) told the abbey’s history from foundation in AD 63 to AD 1382. The monks would have turned the wooden pages covered with parchment and read or pointed out key parts of the abbey’s history to visitors. This box of wooden leaves covered with parchment still survives and is kept in the Bodleian Library in Oxford.

Over the centuries some of many people visiting Glastonbury have dropped or lost small objects. When these are found by archaeologists they can tell us a great deal about people’s lives and beliefs.

Objects excavated at Glastonbury show particular devotion to the Virgin Mary and Christ. A small terracotta medallion depicts Christ’s hand with the sacred wound wound (the hole where the nail pierced his hand when they crucified him) and abbreviated lettering for ‘Jesu Mercy’.

A small copper alloy plaque is engraved with symbols and biblical passages associated with the Virgin. A rose (one of the symbols for Mary) is surrounded by the words “As the lily among the thorns so is my love among the daughters and as a rose in Jericho”. 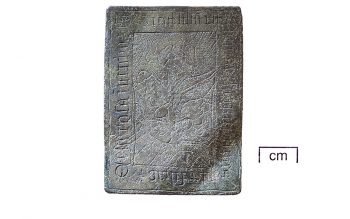 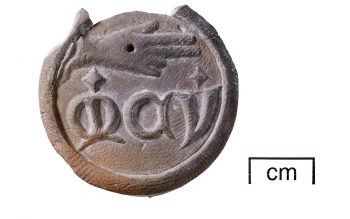