How did Joseph of Arimathea become associated?

A monastery’s reputation and status depended in part on the antiquity of its origins. In the 12th century, William of Malmesbury said the ‘Old Church’ at Glastonbury was the earliest in Britain and had been founded perhaps by disciples of Christ or the earliest of his followers in Britain. Later. generations extended this history even further and claimed that it was founded by Joseph of Arimathea in AD 63. This gave Glastonbury a direct link with the life of Christ. 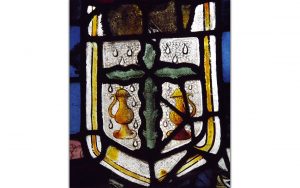 The Bible says that Joseph of Arimathea gave up his tomb for the burial of Jesus Christ after his body was taken down from the cross. Medieval legends further claimed Joseph was not only a relative of Jesus (some said his great uncle) but that he brought the Holy Grail to Glastonbury, the very cup that Jesus had used with his disciples at the Last Supper. Other stories say he brought two cruets (vessels usually used to hold wine or water for the Eucharist) holding the blood and sweat of Jesus collected at the cross.

In the 16th century, Abbot Beere wanted to promote Joseph of Arimathea’s association with Glastonbury. As part of these efforts he created a chapel beneath the Lady Chapel and probably was responsible for the composition of The Lyfe of Joseph d’Arimathie at Glastonbury around 1520. 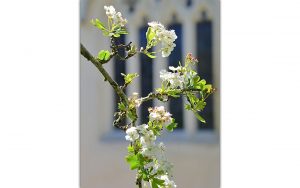 This story of Joseph’s life included a description of Joseph’s travels as part of the tin trade and his coming to England, as well as the first mention of a flowering thorn at Glastonbury associated with Joseph. This later story, which became hugely popular in the 17th century, claimed that the thorn bloomed from Joseph’s staff when he planted it in the ground on Wearyall Hill.

The story of Joseph of Arimathea and the possibility that Christ himself had come with him to Glastonbury was the inspiration for William Blake’s famous poem ‘Jerusalem’. The tree was believed to be miraculous because it blossomed twice a year, at Easter and Christmas. Various Holy Thorns in Glastonbury were claimed to descend from the original tree.