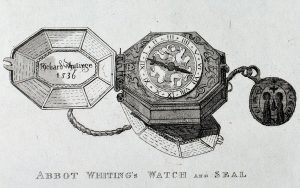 Glastonbury Abbey was one of the final monasteries to be dissolved by Henry VIII in 1539. The abbey was valued as the second wealthiest in England – only Westminster Abbey was richer – with an annual income which was greater than that of the king.

Following a mock ‘trial’ for robbery and other crimes, the 80-year old Abbot Richard Whiting (1525-39) was hanged and quartered on Glastonbury Tor, together with two of his monks. Whiting was dragged through the town on a hurdle up the Tor, where he “took his death patiently“.

After hanging, his head was cut off and placed over the great gate of the abbey. The four quarters of his body were preserved in tar and then displayed at Wells, Ilchester, Bridgwater and Bath, as a warning to others who might think about defying the king.