Archaeologists have found little prehistoric material on the Glastonbury peninsula. Prehistoric trackways were built to the west of Glastonbury. To the north-west there were unique Iron Age ‘lake settlements’.

A small amount of prehistoric material has been found on the abbey site, but little evidence has yet been found for Roman settlement around Glastonbury. The site was near the Fosse Way, the Roman road from Exeter to Lincoln. Roman building material at the abbey suggests that there was a major Roman building in the area, but we do not know where this was. 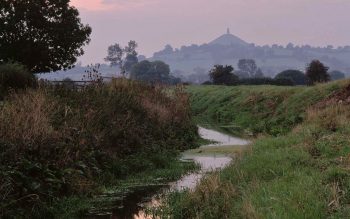 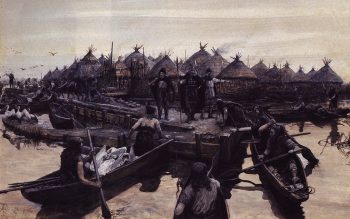 A reconstruction of Glastonbury Lake Villages by Forestier (1911)

Glastonbury Tor (158m high) dominated the marshland of the Somerset Levels. By the 6th century, Glastonbury was at the core of a sacred landscape of hermits. It is first described in the Life of St Dunstan (c. AD 995) written by a monk known as ‘B’:

“…there was an island belonging to the crown, the Old English name for which was Glastonbury. It spread wide its curving shores, surrounded as it was by waters in which fish abounded and by river swamps. It was well suited to the many requirements of human need, and, what is most important, it was given over to the holy service of God”

The monastery reshaped its wetland environment. A 1.75km canal was constructed in the 9th or 10th century, from the River Brue to the market place. In the 12th and 13th centuries the abbey drained wetlands for pasture. It ‘canalized’ rivers for navigation, flood prevention, and powering mills. Unclaimed land was used for fish, wildfowl, reeds and alder woodland.

Other monastic sites in the locality 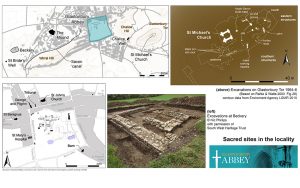 Glastonbury was part of a network of early island monasteries in the Somerset marshes. Fourteen possible hermitage sites have been found in the Somerset Levels. These include Glastonbury Tor, Beckery and possibly Meare, Godney and Marchey. Excavations at Glastonbury Tor (1964-6) found timber buildings on platforms cut into the rock. The earliest dated to 5th or 6th centuries.

Archaeologists excavated (1967-8) a small timber chapel and cemetery of adult males at Beckery. This suggests a late Saxon monastic community. Glastonbury’s legends claim that St Bridget visited Beckery in the 5th century and the abbey claimed to hold St Bridget’s possessions as relics.