Building of the Lady Chapel

Date and Purpose of the Lady Chapel 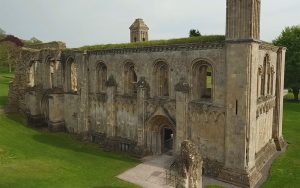 The Lady Chapel at Glastonbury Abbey, as it exists today.

Both the Lady Chapel and the timber vetusta ecclesia, the timber ‘Old Church’ which it replaced were dedicated to ‘Our Lady’, the Blessed Virgin Mary.

Very unusually for a medieval abbey, at Glastonbury the Lady Chapel was positioned at the west end of the great church rather than the more normal east end. This positioning was because it was directly built on the site of the Old Church which had burnt down in the great fire of 1184.

This Old Church was considered to be the holiest part of the abbey, having been established (it was believed) by the earliest Christians, and so it made it a natural choice for the site of the new Lady Chapel. The Old Church had contained the relics of hundreds of saints as well as other treasures, so the very ground it had stood on was sacred.

See the animated visualization below for an impression of what the Lady Chapel interior may have looked like at its height. 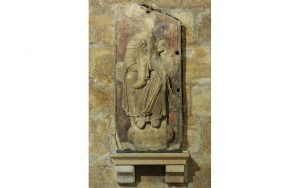 The York Virgin statue, possibly similar to the Virgin statue in the Lady Chapel (© Louise Hampson; Reproduced with kind permission of Chapter of York)

A later addition to the 1140s chronicle of William of Malmesbury described a miraculous wooden painted statue of the Virgin and Child which survived the fire that destroyed the ‘Old Church’ in 1184.

The face of the Virgin’s sculpture was blistered by the heat as if it was a living person, but the rest of the statue was apparently unscathed. It was believed that the statue could perform miracles and it was given a place of honour in the eastern end of the newly-built Lady Chapel. The fame of the miraculously-preserved statue spread and many pilgrims came to the Lady Chapel seeking cures and blessings from the Virgin Mary.

Building work on the Lady Chapel began straight after the fire of 1184. and the project proceeded at speed. So anxious where the monks to rebuild on their most sacred site, the chapel was ready for use two years later. The work was paid for by King Henry II as part of his ongoing patronage of Glastonbury, but both the funds and the work stopped when he died in 1189. As a result the carvings above the south door were never finished. The sculptures above the north door the door by which most pilgrims would enter the chapel, show scenes from the life of the Virgin and reflect the popularity of her cult. 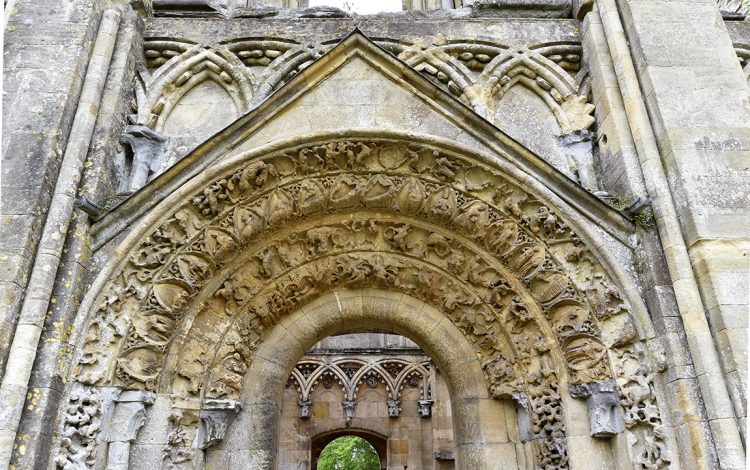 The Old Church had been a separate building, but the reordering after the fire of 1184 offered an opportunity to connect the various parts of the church into one. The Galilee Chapel, built in the early 13th century, now linked the Lady Chapel to the great church. The Lady Chapel’s east wall was removed and a screen inserted in its place which separated the two chapels, but made the whole church one interconnected space.