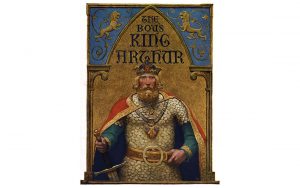 On 24 May 1184 (St Urban’s Day) a devastating fire swept through the abbey. It destroyed much of the church and cloisters, the treasured books and sacred relics. Many of these were housed in the vetusta ecclesia, or ‘Old Church’, that was believed to date back to the time of Christ. William of Malmesbury, writing in the 1120s, had described the old church as containing relics and reliquaries too numerous to count.

The fire was a catastrophe and the monks urgently needed funds to rebuild the abbey. The apparently miraculous discovery of the graves of King Arthur and Queen Guinevere only a few years after the fire provided a very welcome potential source of income. Modern historians have argued that the monks may have staged the exhumation of Arthur and Guinevere to attract royal patrons and pilgrims and their money to Glastonbury. 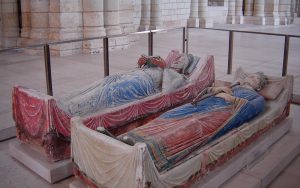 King Henry II himself may have played a role in finding ‘Arthur’s grave’. It was claimed that he informed the monks that Arthur was buried at Glastonbury after being told by ‘an ancient Welsh bard’.

Henry may have had personal motives for wanting a royal cult of Arthur at Glastonbury. Henry was a member of the French ruling class and a new cult of Arthur would connect him with the story of the heroic and saintly British king. Such a cult might usefully attract attention away from the cult of Thomas Becket at Canterbury.

Archbishop Thomas Becket was murdered in 1170 by four knights who claimed to be acting on Henry’s wishes. Despite hotly denying this, Henry II was popularly blamed for Becket’s death. Henry II remained a patron of Glastonbury until his death in 1189.

Abbot Sully and Richard I

By finding Arthur’s bones in England, the Plantagenet monarchs could claim a Celtic king for their cause and bask in the reflected glory.

In the late 12th century the Plantagenet kings were struggling to consolidate their empire across Britain and parts of France, as minor rebellions broke out. The Plantagenet kings needed to prove their right to rule, following the disastrous civil war and anarchy in the reign of King Stephen. They also needed to restore the support of the church in the wake of Thomas Becket’s murder. 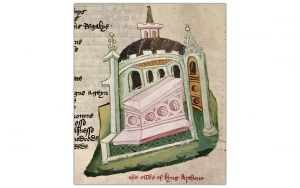 In 1189 the new king, Richard I, made his cousin Henry of Sully abbot of Glastonbury. In 1190, King Richard made his young nephew Arthur heir to the throne. In 1191, Abbot Sully discovered the grave of Arthur at Glastonbury, acting on the information given by the former king Henry II. The sequence of events could not have been better and the link between King Arthur, Glastonbury, and the crown was made, partly shaped by royal ambitions and political context.