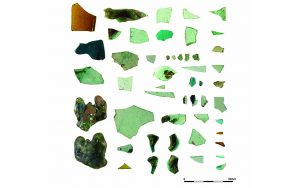 Ralegh Radford excavated five glass furnaces in 1955-7 near the Saxon churches. The furnace floors provide unique evidence for early medieval glass-working in Britain. There were 262 associated objects. These included vessel and window glass, waste and crucible fragments, and production materials.

The furnaces were oval-shaped with a stoke-hole at floor level. The furnace bases were made with reused Roman tiles. Some tiles show splashes of blue-green glass. The domed superstructure was made of daub (clay, dung and straw). They were used to melt glass before reworking. Experimental reconstructions suggest that they could sustain temperatures up to 1050 degrees C. View the animation below to see an example of a glass furnace from this period.

Scientific analysis: how and when was the glass made?

Scientific analysis of early medieval glass from across Europe shows that it was made in two different ways. Some was made from primary ingredients at large production centres in the Near East and the Mediterranean. Other glass was locally produced in western Europe using glass salvaged from Roman sites. Chemical analysis of samples of the glass from Glastonbury by Hugh Willmott (University of Sheffield) and Kate Welham (University of Bournemouth) suggests that it was made from reused Roman materials. Furnaces were built at Glastonbury and used to rework salvaged Roman glass that was collected or imported for craft-working.

Charcoal samples associated with the furnaces were recently radiocarbon dated. Statistical analysis suggests that the glass-working was a short-lived ‘single-event’. This dates to the late 7th or early 8th century. It could be linked to the building of the first stone church by King Ine (AD 688-726). Craft specialists were probably brought to Glastonbury to build the first stone churches and to make glass for the windows.